Making surfmats is what we do

It was this shared desire that inspired Matt Fedden and Ian Jermyn to start collaborating together in 2014 on the design of Mc Surfmats. Now in 2017 the two have marked their commitment to creating beautiful, hand-made, high-quality surfmats by founding Warpmats.

Every Warpmat is carefully hand-made by us. We’ve sought out quality, lightweight nylon fabrics that are both soft and highly robust. The techniques we use in the build process result in surfmats that are tough and can withstand regular use, even in punishing conditions.

We’ve continued to evolve and improve our surfmats based on feedback from our riders around the world. As a result we’ve identified specific designs that consistently perform well. We’re offering these as reliable go-to models to establish or add to your current quiver of surf craft. If you’re keen to participate in the design process and play with the design and look of your new surfmat, our Custom service gives you that opportunity.

There’s a lot of fun to be had playing with the aesthetics of the materials we use. We’ve developed a range of techniques using acid dyes that create some visually stunning results. We also use various methods to create grip patterns that are both fun and functional.

Look after your Warpmat & it will last you for many years 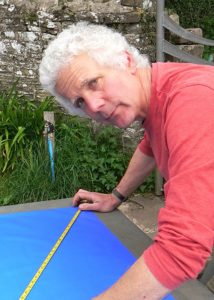 Matt was six when he made his first boat out of a beehive box and sailed it across Titley pond. He’s been making, mending and generally fooling around with hulls, boards and mats ever since. His multivariate skills as a craftsman extend from wood to metal to high-performance airbags.

“In college I studied bats and farming and followed this up by working for several years in West Africa and the Caribbean. When I returned to the UK I worked as a blacksmith and have done for the past 25 years. I’ve been keeping my hands busy designing and making work since.”

“I got into surfing on the river Severn 20 years ago. However, it was the surf mats that really started the obsession with really having fun in the surf. My riding started with a Redback, which soon gave way to a Paul Gross Fourth Gear Flyer. After making my first surfmat in 2013 I was hooked. Since then I’ve been building, testing and refining the surfmats, along with the tools and the techniques I use to bring them to life. It has become an all-encompassing passion.” 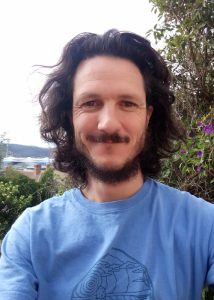 Humbled on his first  session on a west coast Irish slab, he knew surfmats had ruined his life. Ian is the transient maker/creative behind Organic Devolution, an umbrella under which he has been writing, illustrating and printmaking since 2003.

“Sometime in the early 80s I first wobbled to my feet on a coolite board on the Sunshine Coast in Australia. I rode all sorts of craft but fell hard for thick heavy boards with two or fewer fins. When I first travelled to Ireland in 2009 I found the best waves of my life. I bought my first surfmat while living on the west coast. I was continually bewildered with what they we capable of taking on. With surf conditions tiny through to terrifying, a surfmat soon seemed like the most sensible, or most ludicrous, choice.”

“The sea and the littoral fringe influences the illustration and printmaking work I do through my other creative project Organic Devolution. I’ve always been keen on making things – be they for riding waves or equipment require for some creative project.  When I’m not working on creative projects I’m hanging out with my growing family and hunting waves as often as I can. For now, our family has the primal wilderness of Tasmania as a backdrop for our daily lives. ”

Custom surfmat enquiries | Shop our stock models | Follow us on Instagram and Facebook to see pictures and read stories about our latest builds, our process and our Warpmats in action.